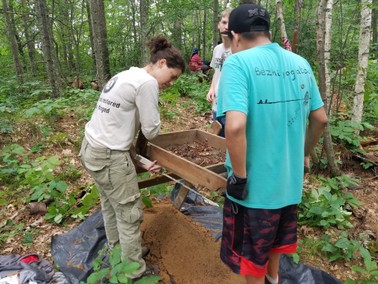 Join us this summer as we explore a 19th-century logging camp near the shore of Cass Lake in northern Minnesota! It includes a large foundation that represents two buildings: a bunkhouse and a mess hall, which are aligned end-to-end. Two other foundations have been tentatively identified as the foreman's quarters and a stable. Artifacts associated with the site include bottle glass, nails, a clay pipe stem, and a T-bone steak bone. The steak bone was found in the foreman's quarters, suggesting he was eating better than his men! Our project will include archaeological survey as well as excavating formal, one-meter square units. One of the goals of the project is to delve into the lives of loggers in northern Minnesota, and discover all we can about the site where they once dwelt through archaeology. Come out to the Chippewa this year, and help us learn more!