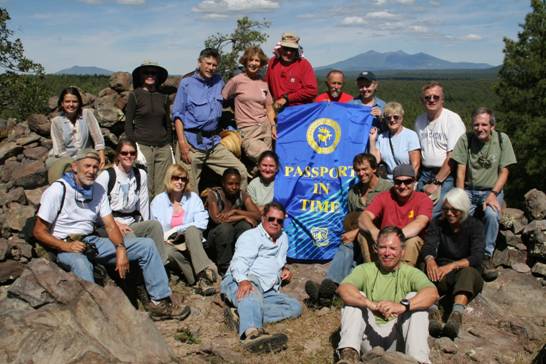 (Photo: Passport in Time crew photo at Ruin Mountain with San Francisco Peaks in background)
Because chronological controls are poor in the Sycamore Canyon Rim area, Kaibab archaeologists hoped to collect data such as these to compare to their findings in the Upper Basin. Since 1990, Kaibab archaeologists working with David Wilcox have discovered 6 ball courts along the "frontier" area between the Southern Sinagua, Prescott, and Cohonina culture areas. These basalt-cobble paved, oval-shaped features have two entryways and measure, on average, to 50x25 meters. Based on the absence of Pueblo I pottery (no Lino Black-on-gray or Kana'a Black-on-white), and the absence of Pueblo III pottery (no Flagstaff Black-on-white or Sunset Red), Kaibab archaeologists have believed that most of the Sycamore Rim area was occupied during the Pueblo II period, also known as the Medicine Valley phase (Christensen, Hanson, Sorrell and Weintraub, 2006).
Methods 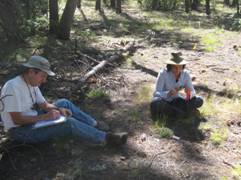 (Photo: Sandra Coambs and Chris Reed conducting sherd thickness test at Round Mountain Ballcourt)
To implement Dan Sorrell's sherd thickness study, archaeologists queried a database to determine sites most likely to contain at least 50 Deadmans Gray sherds. During the PIT project, Kaibab archaeologists led crews of three to four volunteers to each of the sites, where recorders then pin-flagged 50 Deadmans Gray sherds. When crews visited sites with hundreds or even thousands of Deadmans Gray sherds, they conducted multiple studies. Each crew split duties evenly. One person used Neiko 6" digital calipers to measure the thickness on four corners and the center of any given sherd. The other person then recorded the readings on a sheet (see Figure 2). The volunteers switched after each had measured 25 sherds. At the end of the day (or sometimes in the field when a laptop was available) crews entered the data into an Excel spreadsheet, which then averaged the five readings on each sherd and calculated an average thickness of each data set (see Figure 3). Table 1 lists the results below, and includes both the average and the expected site occupation date derived from Sorrell's linear and quadratic equations. 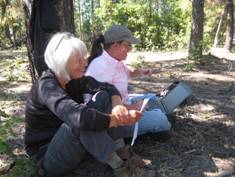 (Photo: Joan Radonich and Colleen Nichols enter data into the field laptop computer)
TABLE 1.
Sherd Thickness Values and Estimated Occupation Date (+/- 40 years)
*Blue color indicates thickness values outside range of expected dates.
**Bold numbers indicate average of sites with multiple readings.
Results of Study
During the project, crews measured sherd thickness at 17 sites (including all six ball courts). These sites ranged from single-room, masonry outlines to sites with multiple structures and features. As expected, it was found that all of the thickness values post-dated the Coconino Phase (A.D. 700-900). However, researchers were surprised that seven of the 17 sites dated well into the Pueblo III range (post-dating A.D. 1100), despite the absence of ceramics from that time period. These results are contrary to the belief that the Cohonina completely abandoned the Sycamore Rim area after A.D. 1100 (Christensen, Hanson, Sorrell, and Weintraub, 2006). Based on the thickness values, three of the ball court sites date well into the 1100s A.D. (Wagner Hill, Buzzard and JD). This may indicate that while most Cohonina migrated from the area prior to A.D. 1100, some may have remained, or at least returned seasonally. It is also plausible that trade networks broke down and such assemblages never made it into the study area. 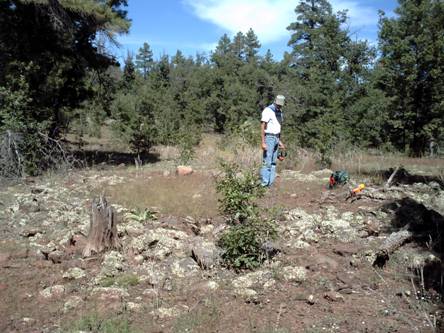