Remember Me - Passport in Time 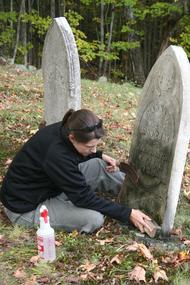 (Photo: Archaeologist and historian Sarah Jordan, from the White Mountain National Forest, meticulously scrubs the gravestone of pre-Civil War era Ellsworth Hill resident Hannah Avery with a little plain water and a lot of loving care. Photo Courtesy of Marcia Morris)
October 13, 2010
ELLSWORTH—Deep in the midst of a thickly wooded hillside landscape, a hiker in the White Mountain National Forest and surrounding region will frequently stumble upon remnants of a bygone era—a cellar hole, a stubbornly enduring stone fence…and occasionally, a long abandoned neighborhood or family graveyard, with slate, limestone and marble headstones tipping every which way and lichen creeping up the engraved lettering, dimmed with decades of exposure to New England's worst weather.

On one day last week, a team of "Passport in Time" National Forest Service volunteers was working respectfully and quietly, scrubbing and re-setting grave markers in a shady grove on Ellsworth Hill.

The site on Cook Hill Road overlooks the mountain range across the valley — in October, vividly tinted with the glowing orange and purple hues of autumn. It was a splendid, serene and peaceful spot, still partially covered with a graceful canopy of oak, maple and beech leaves, with dappled sunlight peaking through.

"Most of the historic hill farm communities of New Hampshire were abandoned by the late 1800's," explains White Mountain Forest Archaeologist Terry Fifield, who heads up the Heritage Program in the National Forest and last week was overseeing the "Passport in Time" cemetery re-habilitation project for the Forest Service. 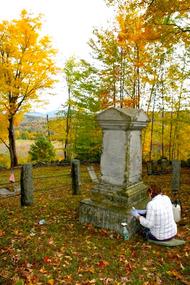 (Photo: Volunteers from the National Forest Service’s Passport in Time Program spent all of last week cleaning and rehabilitating the White Mountain region’s long abandoned “hill farm era” cemeteries as part of the “hands on” educational service project that seeks to honor and preserve cultural treasures in the National Forest. University of Connecticut student Nancy Paladino works in Cook Hill Cemetery in Ellsworth. Photo Courtesy of Marcia Morris)
"You will find some Civil War era monuments amongst the gravestones," said Fifield. "These are places that were honored at the time that people were living here. To a certain extent they have been forgotten, but you can see that someone still remembers."

He pointed to the American flags planted at each veteran's gravesite in the small cemetery plot.

"The forest did not always look the way it does today," said Assistant Forest Archaeologist Sarah Jordan. "Now there is so much forest cover that people think it was always that way. But it was very different back then. It is so interesting to imagine what life was like when this rocky hillside consisted of whole communities of individual sheep farmers. How did they do it?"

In the early 1800's, the landscape was cleared to make way for the historic sheep farm communities that were painstakingly dug out of the granite hillsides and which thrived, for a time, in the era prior to the Civil War.

When the inhabitants of the region abandoned the farms and migrated west after the war, they left behind the foundations of a tough farm life that has long been extinguished in this part of the country, but continues to shape New Hampshire's culture and mindset a century or two later.

Sarah Jordan takes a break from her task, carefully cleaning the grave marker of one Hannah Avery, wife of Israel, who died in 1846. She uses only water and a bristle brush, avoiding chemical or harsh detergents that could further degrade the stone.

It is nothing short of miraculous to watch the grey lettering emerge in relief, out from under decades of accumulated grime, moist green mosses and lichen.

Jordan says she thinks the local church marked the graves of certain congregants with the promise to maintain their gravesites, with reverence, forever.

"I think that is just what we are doing," said Jordan.

For their part, the volunteers come from all over the country — Pennsylvania, North Carolina, New York and beyond. They are retired from many professions, students, university researchers and other members of the public who want to get "hands on" learning about preserving cultural resources.

The cemetery project is just one of the volunteer opportunities available from the National Forest Service Passport in Time program. For more information, call 1-800-281-9176, e-mail volunteer@passportintime.com, or visit the Web site, which can be accessed from the National Forest Service Web site or at www.passportintime.com.
Home | About | Current Projects | Previous Projects | PIT Honor Roll | PIT Highlights | Announcements | Contact | General Site Map
Back to content | Back to main menu