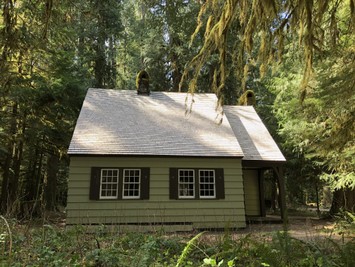 La Wis Wis Guard Station cabin was built in 1937, and is an important piece of Gifford-Pinchot National Forest history. It is one of only two structures of its design in the region. The cabin is situated in the beautiful La Wis Wis campground, just off US Highway 12, in the Cascade Mountains near the southern entrance to Mount Rainier National Park. Old-growth cedar and Douglas fir tower overhead, and the Ohanapecosh River and Clear Fork of the Cowlitz River create an idyllic setting. Three separate Wildnerness areas are also in the immediate vicinity. The building is listed on the National Register of Historic Places (NRHP), and constructed as a Civilian Conservation Corps (CCC) works project. The cabin was used as an administrative residence until it went into disuse in the 1990s. Since then, it has been subjectg to water damage and moisture problems. The restoration PIT project began in 2012 as the first part of a multi-year restoration and rehabilitation effort to prepare the cabin for future use. Work has been on-going each year since. This year, volunteers will install flooring in the main living areas, add insulation upstairs as well as installing wall and ceiling panels in the upstairs; re=plaster the kitchen chimney, add plumbing, and install an on-site propane tank. Again, we certainly have our work cut out for us, but the project and its participants have added to the storied local history of La Wis Wis Guard Station! We hope you will join us in the effort to put this incredible historic resource back into use!