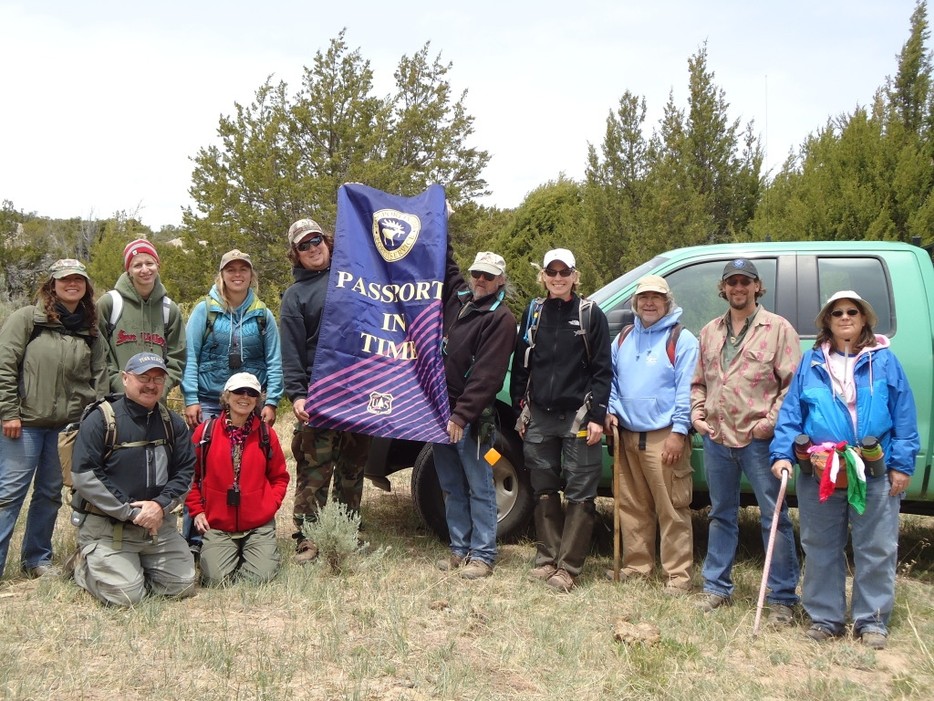 In May 2011, I traveled to the town of El Rito in northern New Mexico to participate in the "El Rito High Country Survey" Passport in Time (PIT) project. The goal of the PIT project was to check out possible archaeological sites at elevations of 7,000 - 10,000 feet: higher than any that had been investigated previously. During the four days of the project, eight other PIT volunteers and myself joined the two Forest Service archaeologists, Lowell Evans and Michael Kyte, to survey the varied terrain of the region, including desert terraces, rocky talus slopes, ponderosa pine and aspen forests, and meadows just beginning to bloom with wildflowers.
On the first morning, we drove south of El Rito to the remains of the Sapawe Pueblo, which had been inhabited between A.D.1200 and 1500. Even though the site had been thoroughly documented before, Lowell and Michael wanted to give us a feel for what we would be searching for during our surveys over the next few days. As we walked across the site, which was about as big as two football fields, Lowell, Michael, and the other, more experienced volunteers pointed out all the artifacts lying on the ground: lithic fragments, pottery sherds, and even a bone awl. As a former geologist, all I saw at first was sand, silt, pebbles, and cobbles. Then, after a while, the artifacts just seemed to "pop" from the background, and I could pick out the flakes of translucent chert with reddish orange streaks, the fragments of glassy black obsidian, and the white and black potsherds.
This experience brought to life the quote "Suddenly one has the right eyes." Although these words were written a century ago by Rainer Maria Rilke, an Austrian poet studying Cezanne's impressionist paintings, I think this thought applies to many situations in life-certainly to looking for lithic scatter and other subtle signs left by humans long ago. 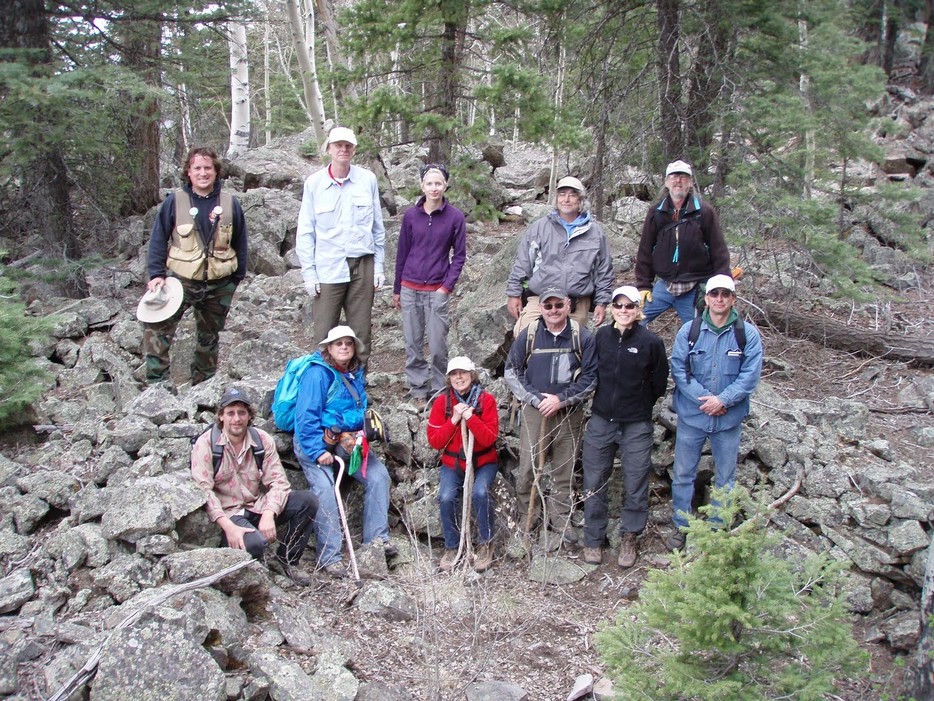 For the next three days, we surveyed several sites. Our discoveries spanned nearly all the eras of human habitation in the region and included a 6,000-year-old obsidian projectile point, lithic flakes and pottery sherds (about 150 to 800 years old), aspen art from the 1940s, ponderosa tree peels (about 150 years old), and winding rows of stacked cobbles and boulders made by the Civilian Conservation Corps in the 1930s to control erosion.
As an easterner and a first-time PIT participant, I was amazed at the abundance and the condition of artifacts at many of our survey areas. The arid New Mexico climate keeps the pottery from "melting" back into the earth and the lithic flakes from being buried deep beneath the ground. In my native Virginia, even recent "artifacts" such as soda bottles and abandoned steel swing-sets can disappear within a ecade beneath thick weeds, leaf litter, and muddy runoff sediments.
Another thing that surprised me was that so many of these artifacts were scattered about in plain sight. I would have thought that someone long ago would have collected the artifacts, boxed them up, and shipped them off to a museum. But Lowell told us that archaeologists here only identify, photograph, document, and then leave the artifacts where they were found. I like this philosophy - it is reward enough to see, to witness, but not possess these objects.
Our project's surveys have laid the groundwork for future, more focused studies. For example, we found pit houses in the middle of a talus slope along a mountain ridge where I would love to return and spend more time. The ancient builders had figured out that the basaltic rock, which fractures in slabs and blocks, made good stone for foundation walls. Even though only a foot or two of the walls remained, I could see the thoughtful, functional design, which in one dwelling included a horizontal chimney-like structure to vent smoke from cooking fires. As we wandered through ten or so of these pit houses, we wondered if the inhabitants were related to the Gallina (a group whose members isolated themselves during the post-Chaco Puebloan era, ca. A.D. 1200). And, with no land nearby to cultivate, we also wondered if they lived in these shelters year-round or only during hunting trips. In this information-overloaded 21st century, it's nice to know that some mysteries still remain.
The day after the project ended, I departed El Rito and drove southwest toward Los Alamos and then on to Albuquerque. On the horizon, I could see the morning sun hitting Cerro Pedernal and Polvadera Peak, the mountains from which the inhabitants of this region quarried chert and obsidian to make projectile points, scrapers, and axes. As a geologist, I'm used to thinking of landscapes in terms of millions of years and ways the earth can change dramatically during that time scale. But, from a human point of view, the shape of this land hasn't changed much in several thousand years; I was looking at the same mountains that have been there for generations. I think, then, that this is the value of the PIT program: the past ceases to be about summaries of events in history and generalizations about groups of people, and becomes a story about unique individuals who left something of themselves that touches us centuries later. I realize that "having the right eyes" is more than a change in vision, it is a change in oneself.
Home | About | Current Projects | Previous Projects | PIT Honor Roll | PIT Highlights | Announcements | Contact | General Site Map
Back to content | Back to main menu